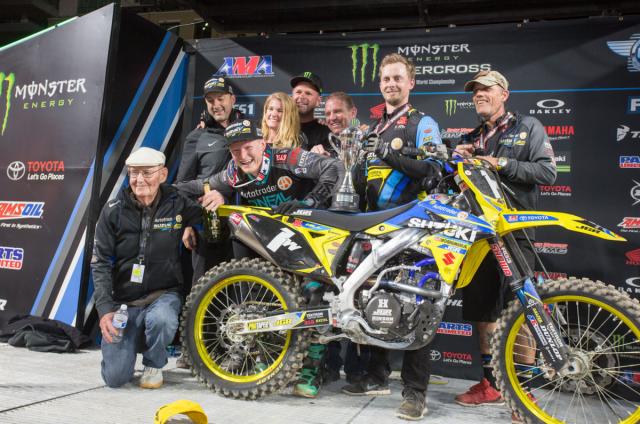 The Autotrader/ Yoshimura/ Suzuki Factory Racing Team had a monumental day at San Diego’s Petco Park for round six of the 2018 AMA/ FIM World Supercross series on Saturday where Suzuki RM-Z250 rider Justin Hill logged the fastest lap time in qualifying, won his heat race, and meticulously picked apart the competition in winning the 250 Main Event in front of 41,237 fans.

Hill’s 250 teammate, Phil Nicoletti, came from last place to just outside the top-10 while RM-Z450 rider Weston Peick fought his way up to seventh after a first-turn crash.

Hill rode with speed and confidence from the very first lap of practice, jumping rhythm sections on his RM-Z250 that only a few of the 450 riders were clearing. The reigning champion clicked-off the fastest 250 qualifying lap and used the first gate choice in his heat race to clear the field and win in convincing fashion. The Oregon native started the Main Event in third place and methodically paced leader Adam Cianciarulo for 11 laps. Hill passed for the lead and stormed away for the win and is now only 12 points out of third place in the standings.

Nicoletti suffered a crash early in the 250 Main Event, but fought up to 11th place. The New York native sits 13th in the standings.

In the 450 class, Peick suffered misfortune when another rider fell in the first turn. That incident didn’t prevent Peick from slicing his way through the field and collecting seventh place. He’s only eight points out of third place in the standings.

Malcolm Stewart returned for another run at the podium with the Autotrader/ Yoshimura/ Suzuki Factory Racing Team. Unfortunately, Stewart was collected up in the same first turn crash that took down Peick. “Mookie” ended the night in 17th.

Justin Bogle was looking to improve in his third race back, but a crash in his heat race knocked him out of action. The initial injury report is a broken upper arm; an updated status will be released when available.